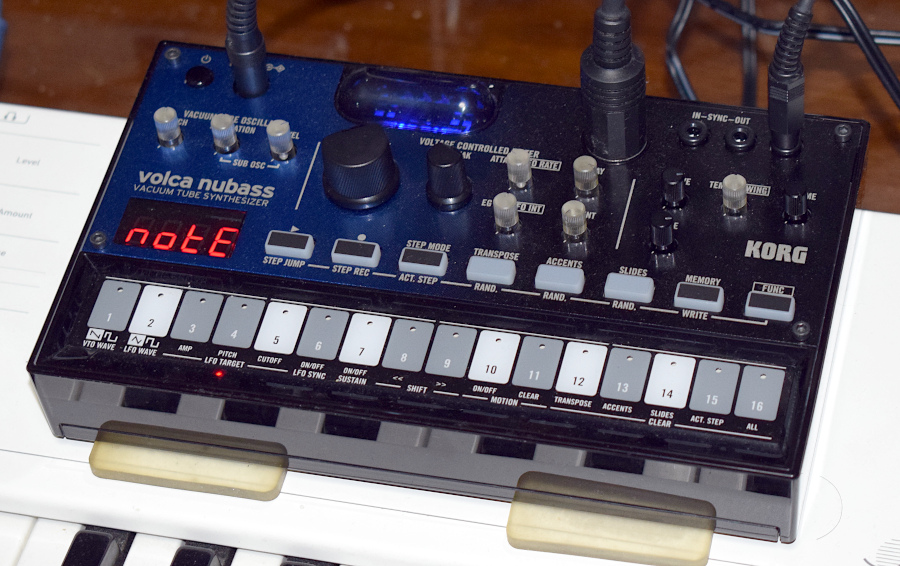 Volca nubass is an analogue monophonic synthesizer released by KORG in 2019. Volca series is a product line of groove boxes. As one of the series, volca nubass has "step 1-16 buttons". The buttons can be used as musical keyboard or sequencer with 16 steps. With sync in and out connector, volca nubass play sequence synced with other volca machines. With MIDI input, volca nubass can receive MIDI notes and control change messages from keyboards and computers.

The biggest feature of volca nubass is that it is equipped with an oscillator that uses "nutube" developed by KORG and Noritake Itron. The nutube has an anode, grid, and filament structure similar to a conventional vacuum tube, and operates as a complete triode vacuum tube. Since nutube uses the technology of vacuum fluorescent display, it operates with less than 2% of the electric power of the conventional vacuum tube, and the volume is less than 30% of the conventional vacuum tube. It has a continuous expected life of 30,000 hours, so there is no need to replace it. Volca nubass is the world's first "vacuum tube synthesizer" (from the manual) that uses nutube for oscillator. Its sound is different from other transistor-based analog synthesizers. I would like to say that it has a mysterious weight, thickness, and softness.